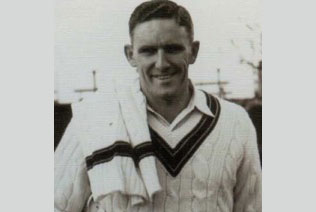 The Central Coast is mourning the loss of its famous sporting son, cricketer Alan Davidson, who died surrounded by family on 30 October, age 92. Alan was born in Lisarow in 1929 and grew up on his family's rural property. He honed his cricketing skills on a pitch he dug out himself, bowling oranges at stumps he made out of gumtree branches. Alan played 44 tests for Australia between 1953 and 1963 and was a star for New South Wales in the Sheffield Shield.

A left-arm paceman, Alan is regarded as one of Australia's greatest all-rounders. He took 186 test wickets over his career and made five half centuries with the bat. In the field his catching skills earned him the nickname 'The Claw'. Perhaps the highest point of his career came in the famous tied test against the West Indies in 1960. He took five for 135 in the West Indies' first innings and six for 87 in the second. He made a handy 44 runs in Australia's first innings and was run out, much to his annoyance, for 80 in the second innings, his highest ever test score—becoming the first male player to achieve the double of 100 runs and 10 wickets in the same test.

Following his retirement from test cricket, Alan continued to contribute to the game as an administrator, selector and mentor. He was made a Member of the Order of Australia in 1987. His memory is honoured at the Alan Davidson Oval in Wyoming. Vale Alan Davidson.